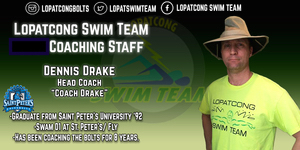 Whether it was swimming on State Championship winning teams in high school, competing on a USA club team, or swimming on a Division I college team, he learned from a variety of coaches how to build a successful swim program.

From this, he took his passion and knowledge to successfully help transform three teams. First, the St. Peter’s University team, his alma mater. As a swimmer, assistant coach, and interim head coach, he helped take a team that was winless for consecutive seasons, to one that was competitive in its conference and winning many more meets than previously attained. Second, the Lopatcong Community Swim Team. As the Head Coach he took this age group team which had lost every single meet for ten years in row, to one that regularly attains winning records, wins league championships, and has had three consecutive undefeated seasons. Third, the Nazareth/Easton YMCA swim team (NEYS). Similar to Lopatcong, it started as a small age group team that never had much success. Whereas now, it has multiple division championships, sends dozens of swimmers to YMCA Districts and States each year, and has produced individual state champions and national level qualifiers. More importantly than all that though, is the pride he takes in helping to mold and develop swimmers in and out of the water. That is, he believes in developing the whole swimmer. Actually, his coaching philosophy is based around an idea you might often hear him say, “Coach the swimmer, not the stroke.” By this, he means there is more than one way to successfully train a swimmer, and training swimmers is more than just technique and yardage. It also encompasses the development of confidence, sportsmanship, team play, and good character within each athlete. 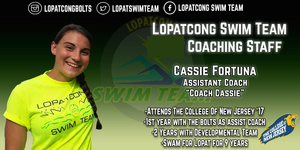 The head coach and assistant coaches consistently rotate from lane to lane and practice group to practice group (including the developmental group). Every swimmer will have the same opportunity to experience the skill and instructional strengths each coach offers. Please keep in mind though, the more often a swimmer is at practice the more rotation of coaches they experience. The less a swimmer is at practice, or if the swimmer can only make the same two days each week, the less rotation they are likely to experience. Addition to the main coaches, we also use part time and volunteer coaches to help us out.